Australia and the War in the Air 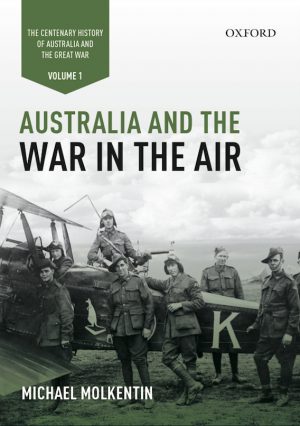 The first book in a new series that will explore Australia’s role in the Great War.

From the earliest days of the Great War, Australians volunteered to fight in the air – warfare’s newest arena, and one that would transform the nature of military operations. In the squadrons of the Australian Flying Corps and with Britain’s flying services, Australian airmen fought in campaigns that spanned the length and breadth of the First World War; between 1914-18 they served in the Middle East, the Mediterranean and on the Western Front. By 1919 over 4 000 Australians had served with the empire’s flying units. Modest compared to some of the other British dominions, Australia’s part had been the most apparent. Whereas the other dominions had opted to provide manpower to serve the general imperial cause in Britain’s flying services, the Commonwealth’s insistence on a distinctly national contribution ensured recognition for Australia’s contribution to the empire’s effort in the air.

This book examines Australia’s role in history’s first major air war. Unlike previous accounts, which focus on the airmen of the Australian Flying Corps in isolation, this study conceives the Australian part as one of an imperial – and international – whole. In addition to using Australian involvement as a case study to analyse the impact air power had on military operations, this study also addresses aspects of organisation, training, administration and command – as well as the imperial politics and strategic issues that contextualised dominion participation in the war.

Drawing on archival records in Australasia, Europe and North America, Australia and the War in the Air provides a fresh perspective on Australia’s involvement in the Great War and a revaluation of air power’s early influence on warfare.

Released in October 2014, Michael Molkentin’s Australia and the War in the Air is the first of a five volume history of Australia’s experience of the Great War, with succeeding volumes set for periodic publication with the final volume due for release in April 2016. Conceived as a contribution to marking the centenary of the Great War 1914-18, this series of books is intended to be a ‘scholarly account of the impact of one of the great formative national experiences’. In this aim the five volume series sets itself apart from the more sensationalist and populist commercial offerings that currently flood the market and loosely pass themselves off as history.

The Centenary History of Australia and the Great War is being written and edited by professional academic historians, and being published by the highly reputable Oxford University Press. In short, the series is set to become a valuable reference work that would supplement any military history collection, while also being a worthwhile primer for readers with little knowledge of Australia’s Great War history.

This series is not intended to supplant the twelve volume official history of the Great War, edited and in a large part written, by Charles Bean. Rather it is intended to view the war from a wider perspective gained from access to records not available to Bean and his team. The newer work also differentiates itself from the earlier histories in that it takes a more strategic-operational perspective of the war, rather than recording the more personal experience of the conflict. Bean was concerned with ensuring that the story of the combatants was at the forefront of the narrative, and this approach left much of Australia’s involvement in The Great War left untold. This new series aims to fill that void, thereby complementing the official history. The first volume, Australia and the War in the Air by Michael Molkentin details Australia’s involvement in the first great air campaigns in the history of warfare. Indeed, with military aviation employed in very few conflicts prior to the Great War, there was little appreciation of how to raise, train, sustain and employ a national air arm. Molkentin’s early chapters, which look at the Australian Flying Corps’ (AFC) formation, organisation and training, reflect the tentative nature of military aviation in Australia at the outbreak of war.

The AFC was a small component of a very large aviation force fielded by Great Britain, and Molkentin communicates this reality very well, including in the narrative ample description of the relationship between the AFC and the Royal Flying Corps, Royal Naval Air Service and, from April 1918, the Royal Air Force. The reality that the AFC did not operate in isolation is further expounded with detail of the role of the Australian and British Governments in the development and employment of AFC. It is in this wider view of the AFC experience that we see a marked difference between the official history—written by Frederic Cutlack and edited by Charles Bean in 1923—and that of Molkentin’s Australia in the Air War.

In the chapters dealing with AFC operations, the air war and how it related to theatre wide efforts is captured in excellent detail and makes for good reading. The theatre wide perspective gives the reader ample appreciation of just how rapidly the air campaign became pervasive during the Great War. The book provides a ready example of the difference between simple battlefield support and the far more complex air campaigns which span whole-of-government and whole-ofconflict requirements. From the point of view of air power development alone this volume is worth studying.

Overall Molkentin has produced a very readable study covering the development, organisation and employment of the AFC in the Great War, set against a backdrop of operations with allied air arms and coalition Governments— all in an era when such concepts were in their infancy. This book and the entire five volume set, make for an important contribution to the understanding of Australia’s involvement in the Great War.