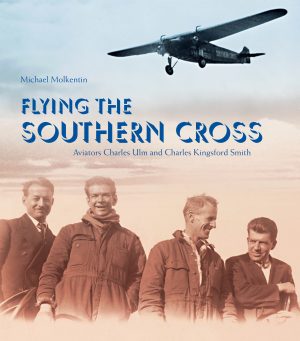 Australian aviators Charles Kingsford Smith and Charles Ulm made the first trans-Pacific flight in 1928 in an aircraft constructed largely of timber and fabric, the Southern Cross. With Americans Jim Warner as radio operator and Harry Lyon as navigator, they made the trip from Oakland, California, in nine days, facing electrical storms, torrential rain, equipment breakdowns, fuel shortages and the ever-present fear of engine failure. Navigational aids were primitive; contact with the outside world was by Morse code only; safety measures were non-existent. After many close-calls, they landed triumphantly in Brisbane, where a crowd of 15,000 welcomed them as heroes.

Throughout this extraordinary journey, Ulm kept a logbook in which he recorded his raw impressions of the flight. His entries, brief and to the point, give a striking sense of immediacy and authenticity, and a selection of facsimile pages from the logbook forms the basis of Flying the Southern Cross: Charles Ulm and Charles Kingsford Smith.

Using logbook entries, the airmen’s memoirs, contemporary newspaper accounts and official documents, supplemented by a range of historic photographs, historian Michael Molkentin gives a gripping account of that epoch-making flight and its aftermath. He takes readers into the Southern Cross, a place where courage, skill and endurance could, with luck, outweigh the fearful risks of a long air journey. Above all, he brings to life the airmen themselves, four very different men who made aviation history.

If you believe the legend we were raised with, then Michael Molkentin's book is going to hurt. And nowhere more so, perhaps, than when he points out that Charles Kingsford Smith's famous pan-Pacific flight of 1928 was touted by The Sun as due to Aussie greatness of character and pioneering spirit when in fact it was made possible only by American GA Hancock's generosity after Australian governments withdrew funding. The Sun was also responsible for attributing aviation glory mainly to Kingsford Smith - who always protested that success was a team effort - and Molkentin seeks to redress the imbalance, particularly concerning Charles Ulm. None of this detracts from the courageous achievements of our pioneer aviators but Molkentin's research shows the men behind the public images. Like anyone, they were flawed. Ulm's treatment of fellow crewmen Warner and Lyon, for example, was correct but uncharitable. The interplay between colleagues could be strained, as it was between Keith Anderson, Ulm and Kingsford Smith, and yet Anderson lost his life helping search for Ulm and Kingsford Smith when they went missing for two weeks in WA in 1929. Illustrations abound in this lavishly produced book. The sepia tones coupled with so much detail revive the 20s and early 30s. Molkentin's book is bound to delight aviation enthusiasts and general readers alike. Verdict: duller truth makes for even brighter glory.

The dashing Charles Kingsford Smith, chief aviator of the first trans-Pacific flight, has become an Australian legend. But this legend was forged, Michael Molkentin suggests, at the expense of the co-pilot, Charles Ulm. The Sun newspaper's coverage of the flight edited Ulm's logbook to imply that it was written by Kingsford Smith. This exclusive focus 'would later become integral to "Smithy" folklore'. Molkentin restores Ulm's centrality by using his terse but often gripping logbook - later incorrectly displayed in Parliament House as Kingsford Smith's diary - as the scaffolding for his story. He also fills out the crucial role played by the Americans, navigator Harry Lyon and radio operator Jim Warner. From Clipped entries such as 'last sight of land for 24 hours' and 'terrific rainstorm with violent bumps', Molkentin teases out the highs and lows of this famous flight.